Jose Manuel Machado, a corporal in the Catalonia Volunteers, came to San Diego in 1792. He married Seradina Valdez. About 1821, he built the now famous Machado Landmark house in San Diego Old Town. It was a wedding gift to his favorite child, Maria Antonieta.

Juan Machado, of this prolific family, was born at San Luis Rey Mission, now part of Oceanside, - California, He lived in San Diego's Mission Valley, “up by the first date palm” to be planted there. His residence ended with the Great Flood of 1821. In September or October of that year, on a night when 1t was not raining in San Diego, flash flooding in the mountains brought a torrent so severe that it changed the mouth of the river channel. Besides inundating the sertlers with water, it pummeled then with pumpkins, washed down from an El Cajon ranch.

Juan Machado was also remarkable for having purchased for $40 the remnants of the old fort on Ballast Point near Point Loma.

But his future lay, in what now is south of on the border, Beginning in 1827 when Governor Jose Maria Echeandia granted him 19000 hectares (47500 acres) in Baja California,” about 38 miles from San Diego”. The land included five springs and it was - named Rancho El Rosario (like Tijuana, vis. Rosarito has two spellings in historical accounts), and the area is today's Playas de Rosarito (Rosarito Beach), extending from what now is San Antonio del Mar to Popotla on the beach front.

From 1827 up until the early 1920', Rosarito was simply know as the Machado Ranch. It was early in 1924 when San Diego papers began to carry small ads for El Rosarito Resort and Country Club.

On the primitive coastal stretch, there was no reliable road, nor were gas and oil available anywhere between Tijuana and Ensenada. The “resort and country club” was a little more than a gun club with the barest of accommodations. But larger plans were afoot. By May of 1925, advertising promised tourists still more: VISIT ROSARITO BEACH RESORT AND COUNTRY CLUB. 16 Miles So. Of Tijuana. Good Roads, Fishing, Sun Bathing, Free Barbecue every Sunday, Good Music.

While hundreds of native Mexicans were molding adobe bricks out of natural dirt many more were molding rich red tiles for the spots of roof. A 1926 ad proclaimed: GRAND OPENING MAY 17, Free Barbecue on Opening Day, ROSARITO BEACH RESORT, Rooms and tents for Rent. Surf Bathing and shower Baths. Hunting. Fishing. Restaurant. Dancing 16 miles South of Tijuana, Good Road, Tijuana, Mexico. It is significant that this ad was coupled with Tijuana's “California Café” with its new and luxurious cabaret. Manuel P. Barbachano was the moving force behind both. A native of Chihuahua Sr. Barbachano had worked for the original Tijuana race-track (hipodromo de Tijuana) which started operation in 1916. He was a true pioneer of Baja California by providing electric and telephone services to Mexicans residing in the state, establishing what he named “the border electric and telephone company”, Barbachano also bid, and was given the construction of the Rosarito-Ensenada Highway in 1935, which he built and of course acquired the small hotel in 1929 and built it into what his dream was.

The beautiful young actress Dolores Del Rio went on to congratulate the new Shore Acres Country Club for its discernment in including Francisco Cornejo's art in the building project that was to include “walls of real life scenes”. As the Rosarito Beach Hotel prospered, the workers and their families gradually settle around it, founding first a village and then the town.

Rosarito Beach Hotel flourished. One old-time employee recalls that on Sunday, Dec 7, 1941, the place was full. “But the news about Pearl Harbor came, and within three hours everybody left”. Americans returned quickly enough, throughout wartime (1941-1945) and the joyful years that followed. The employees from that era remember them as beautiful people who dressed well and behave well, entertained by mariachis. They recall that even drinks were different 30 or more years ago. “The French 75 (BRANDY AND CHAMPAGNE) WAS VERY BIG. Side Cars. Old fashioned. Martinis, but not on the rocks. “For the morning after, Silver Fizz, Morning Glory, Royal Fizz, Now it's Bloody Mary's not fizzers. And instead of cocktails, bar scotch. An original drink from the Hotel was Pete's Drink, made by Pedro Arias, a 1944 bartender, the drink ingredients - Campari, a little gin, vermouth, and lemon juice.

Mr. Arias told us “I have never forgotten the time when a tall man came to the bar asking for a gin and tonic. I asked if he was a boxer and he answered, “Yes, I fight for life”, Arias said. The customer turned out to be actor Anthony Quinn.

Faces from the Golden Age of films were recalled by hotel staff, Victor Mature was the best tipper. Mickey Rooney made the hotel his second home. “Heavy” Jack Palace lived at the hotel for three or four months, also added the names of Lana Turner, Joan Bennett, Debbie Reynolds, Pitcher Don Larsen, and such acclaimed Mexican entertainers as Maria Felix. Also Orson Wells, Esther Williams, Edward G. Robinson, Rhonda Fleming, Robert Stack, Gregory Peck, Vincent Price, Robert Preston, and Spencer Tracy. Victor McLaglen, bartender Arias specially recalls as a frequent visitor, a Scotch drinker, and a friendly man who with his wife often met for a round of drinks. During the war years, gorgeous Paulette Goddard and actor Burguess Meredith were married and passed their honeymoon at the beach hotel.

One year after Manuel Barbachano was deceased, the Rosarito Beach Hotel enjoyed its most lustrous phase. That was when Ali Khan arrived at the hotel with his entourage, including his own chefs. The son of the Aga Khan, and his companion, the lovely actress Gene Tierney. This was the mid 1950's, and he and Rita Hayworth were already in the process of divorcing.

Celebrities of the 70's 80's are not uncommon there. Rock Hudson was a visitor. Herve Villechaise of Fantasy Island came twice, maybe “he was looking for his own fantasy at Rosarito Beach Hotel. 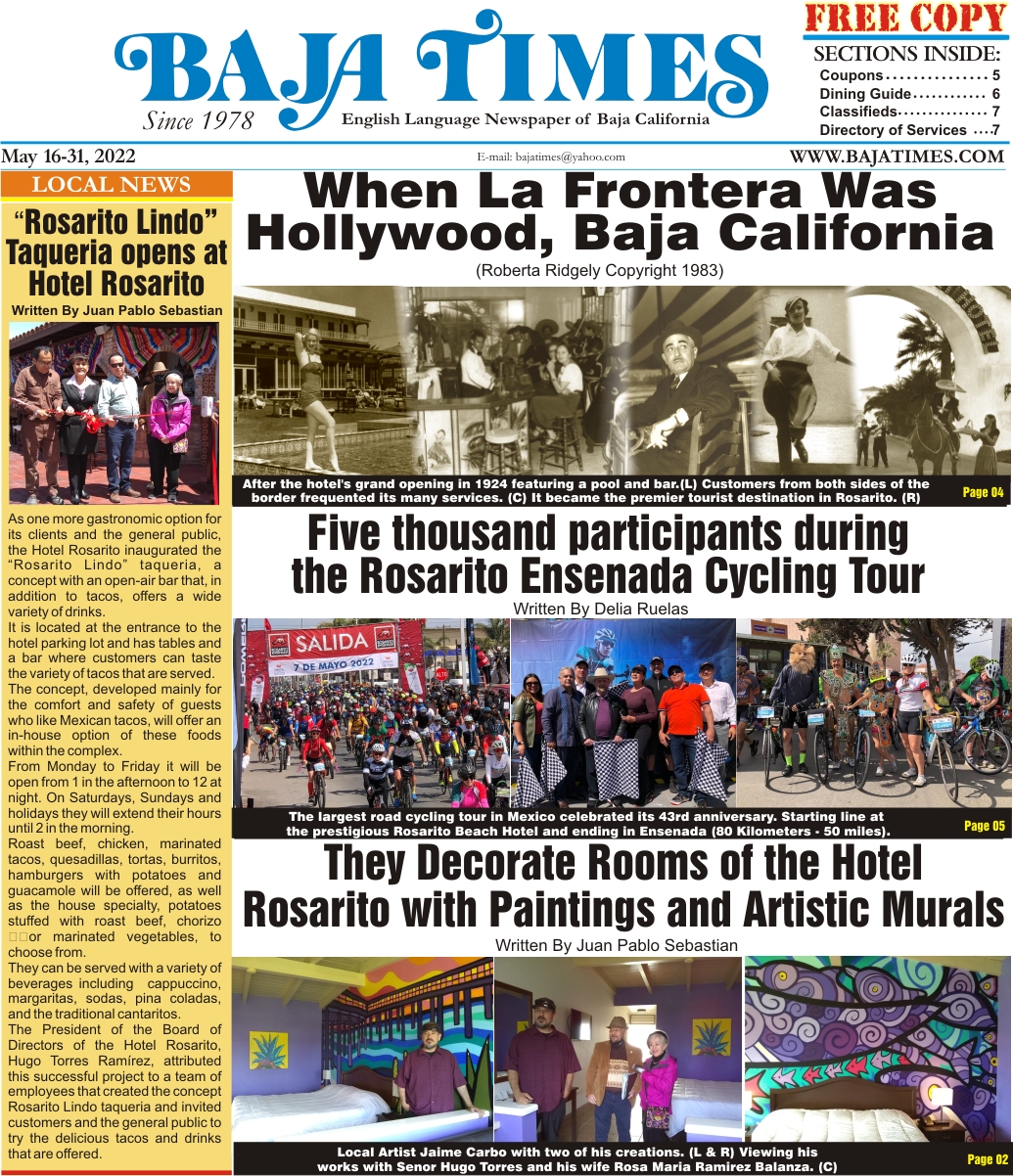 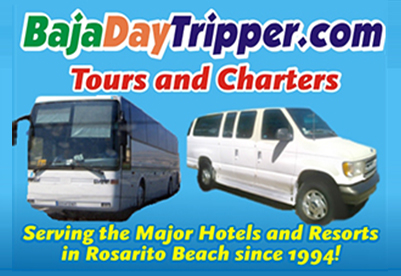 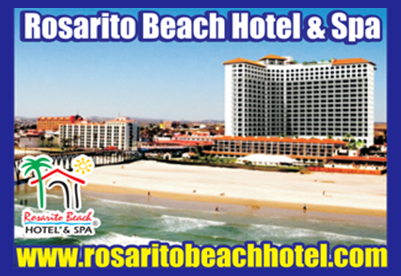